I first noticed the Cape Weaver when I stopped on the bridge that crosses the channel that connects two of the lakes in Green Point Park, in the ocean suburb of Cape Town.  The little yellow-breasted bird was busily constructing a nest, tying together some stout reeds, about a meter above the water’s edge, using strips of grass.  By the next day, the nest appeared to be almost complete and he had started on a second.  As the days passed he continued to build more and more nests.  In the end there were at least ten that I could see.  But where were the females?

And then one day two females appeared while I was watching.  The little male predictably became hyper-excited: flapping, wiggling, screeching.  But to no avail.  The females checked out his attempts at building nests, turned their backs on him and flew off.  My little male disappeared into each nest that they had rejected, to see what it was that they did not like.  He was like a randy real-estate agent who had tried to seduce his prospective female tenants and pathetically failed.

A passing local lady explained to me that the little male was fortunate: normally females which do not like a nest can rip it apart, before heading off to find a better suitor.  She told me that the entrance to the nest is on the underside and if the female accepts the male, he will construct a tunnel, while she lines the nest, and then they mate.

And then came a storm, with strong winds, and the nests were rather greatly shaken, some of the reeds being bent down almost to water level.  Perhaps the females knew what they were doing in refusing my little male.

Some time later, I noticed weaver nests at the other end of the pond. And there was a little yellow breasted weaver, and a female disappearing into and emerging out of a nest.  Was it my little male bird?  I like to think that it was.

But he can’t control his urge to build more nests and attract more females. 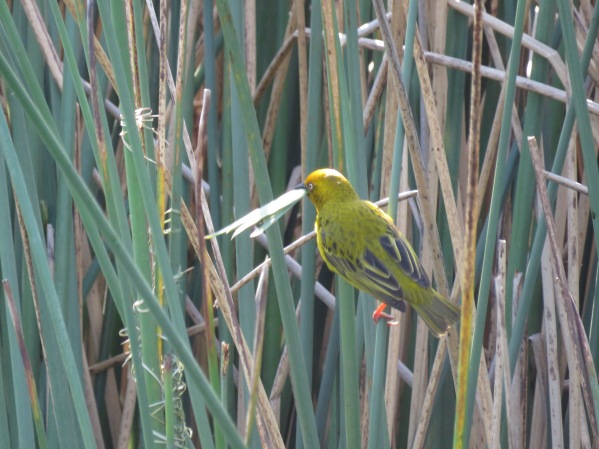 In the meantime, I look forward to watching the next weaver generation emerge…

Until 1969, I had been muddling along in the ‘old technology’ of Quantity Surveying or Estimating, as it was known in the US and Canada.  It was Singer Sewing Machines in London that gave me my opportunity to enter the relatively new world of computer programming.  And I have never looked back.

Our office was in West London, on the Uxbridge Road, in Ealing Broadway.  and it was there that we did our program design and coding on paper.  As a recently inaugurated European division, we did not have our own computer; for program compilation and testing, we went to the UK Guildford office.  I spent as much time in Guildford as I did in Ealing Broadway.  And it was there that I first met Bob Baylis and ‘almost’ met Mark Samuels; our paths were to cross again in 1978, at P-E International, where Bob was employed and when Mark was the Managing Director, but that is a story for another day.

Now I won’t attempt to explain the intricacies of programming in the 1960’s; our world was one of coding sheets, punched cards and tapes, large air-conditioned computer rooms, and one or perhaps two compilations or tests a day.  For the successful programmer, acute attention to detail was mandatory.

I thrived in the environment and was part of a small team sent to Germany in the summer of 1969, to test and install our new inventory system in the German head office in Frankfurt, near the central station and a few minutes stroll from the river Main.  Our hotel was between the office and the station.  The red-light district was adjacent; it took us perhaps one hour to completely orientate ourselves.

We could only have access to the German computer systems after daily production had been completed, so we started late afternoon and worked to very late every evening, rarely finishing before midnight.  We usually met for lunch in a nearby restaurant and on the first day the waiter recommended a local white wine from Rüdesheim.  It was #28 on the menu and we soon learned to order additional bottles of achtundzwanzig.  It was delicious, and day after day, it contributed greatly to the eventual success of our project.

On one weekend, we decided to go to the source of achtundzwanzig.  We took a local train from central station to the nearby river Rhine, and then travelled on a boat down the river to Rüdesheim.  After ample ‘refreshments’, we took the local gondola to Niederwald.  Almost silently gliding over the vineyards, gradually ascending, was an experience I will never forget. I was in love with life; nothing new there.

At the summit was Niederwalddenkmal, a patriotic monument, 38 m tall and finished in 1883.  The view across the valley was stunning and the weather was idyllic.

On one of our last nights in Frankfurt, when the project was almost wrapped up, we went to a nearby striptease show called ‘The Dolly Bar’.  It was luxurious, compared to the normal seedy dives that I had previously experienced in Toronto, the US and London.  The girls were stunning, but what struck me most was experiencing the wall-to-wall sound; I had never heard such wonderful acoustics before. And it was the first time that I had heard Mary Hopkin singing, ‘Those were the days’.

That was 1969, and the sun had arisen and set many times before I was once again back in London; it was late-1984 and I was on my way to the wedding of my good friend, Laín Burgos-Lovece, in The Wirrall, south of Liverpool. I had a room in a hotel on Half Moon Street, just off Piccadilly.

That evening I went around the corner to an old familiar pub in Shepherd’s Market, a pub that I had frequented many times over the years.  I bought a pint and sat in my usual corner.  I had not been there since those bitter sweet days of the summer of 1978; bitter, because my personal circumstances at that time were a mess, but sweet, because I had been deliriously happy with the prospect of an exciting new relationship.

And then the juke box started to play…