My return trip to León was uneventful; a flight from London (Stansted), a bus to Oveido, and another bus through the mountains to León.  I spent the next day wandering around the old city, sitting in the warm sun, watching people, and sipping cold beer and chilled rioja.

With two or three good books, I could have easily passed a month or more like that.

I set out just after sunrise and soon arrived at the Hostal de San Marcos.  It was originally built during the twelfth century as a convent, to provide a hospital and shelter to pilgrims.  Over the centuries the building was enlarged and enhanced and today it serves as a Parador – a government-run luxurious hotel.

But it has not always been a place for pilgrims or paying guests.  Between 1936 and 1940, it was used to hold over 7,000 republican and political prisoners at any one time, during the Spanish Civil War, a black era in the history of León.

For the next two hours I walked along pavements beside busy traffic, eventually wondering if the city would ever end. And then I was suddenly in the countryside, on a stony path, a little removed from a busy road. But the noise of traffic never ceased all day.

On the way I passed two older people. By their dress and accent in Spanish, I think they may have been English.  They were in terrible shape. The old woman was very heavy and seemed to have very bad blisters. The man was emaciated and walked ahead, but was struggling to get one foot past the other. It was only the second time in 26 days that I have ever passed anyone.

And yet I would bet that those two decrepit oldies made it to Santiago; their determination and faith was written all over their faces. They positively glowed.

And tonight in the only hostel in the village, the pilgrim’s menu and my favourite food: garbanzos, cordero and natilla.

It was a day of varied weather. When I set off it was cool, but pleasant. Then the wind struck, dark clouds surged overhead and the rain started. There was nowhere to shelter and for more than an hour I was buffeted and drenched in a downpour.

But then the sun came out and I quickly dried out in the gale force winds. And all day the surface underfoot consisted of loose stones. It was not easy walking for me.

At about halfway the path crossed the river Órbigo on a stone bridge of many arches, the origins of which date back to Roman times. And on the river banks a jousting field that Cervantes mentioned in Don Quixote.

Eventually I trudged up the hill into Astorga and found a very comfortable room on the main plaza.

Once showered, I went to a nearby bar for a beer and there came across a sobering sight that I shall never forget as long as I live. A clean dressed but very laid-back bearded guy wheeled a pram into the bar. In the pram lay a clean-shaven well-dressed man with no legs and only one very deformed arm. The barman knew them and gave the bearded guy a bottle of beer, which he patiently held for his friend, while he sipped on it. They talked, they laughed and despite his awful handicap, the man seemed to be enjoying the moment. When I left, I smiled at him and he smiled back.

Later in the evening I went back to the same bar to talk to the barman about the strange couple. I found him having a break. He told me that the two men were not family, but friends and lived nearby. He said they came to the bar nearly every day. He did not know their history, but they were both locals.

When I went to bed that previous night, I expected to wake up in the morning to sore feet and an aching knee; I was not disappointed.

I also expected a dark and wet greeting, but was pleasantly surprised to see the sun and blue sky. So with a light heart and an aching leg, I slowly set off past the very impressive church, and the Gaudi-designed palace, to the next village, where I planned to have breakfast.

And there I ate the best tortilla I had ever had, and I drank a coffee that Italians would die for. If not quite recovered in body, my spirit was soaring. And the countryside was beautiful. It felt so good to be alive.

After a long but pleasant walk, I eventually arrived in Rabanal del Camino, on a hill, as are so many of the villages.

I found a room in a charming and well-preserved hostel, that reminded me very much of the inn in Paolo Coehlo’s novel, ‘The Devil and Miss Prym’. Every time a man entered the bar, I expected it to be Him. 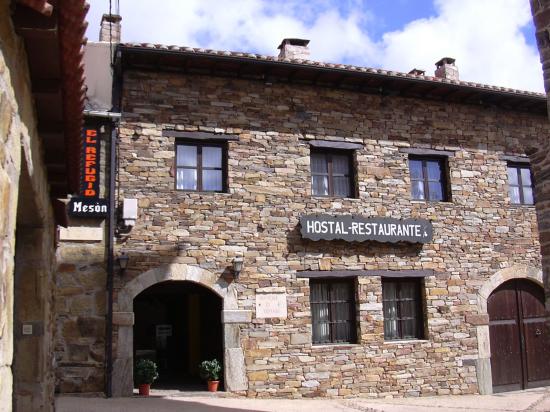 And the dinner was an honest and filling country meal. I felt that I would sleep well that night. I had a room with a skylight and I had already seen the clouds swishing by. Later I hoped that I would see the stars from my bed.

There was very little light pollution in that village.

I awoke to the sound of raindrops plopping ominously on the skylight. After a short time they stopped, but I felt uneasy. With an ascent to over 1500 m and me travelling light, with no heavy waterproof clothing, bad weather was the last thing I wished for.

But that was exactly what I got. It was dark when I started out and I had gone no further than 400 m up the path, when it started. Light at first, it steadily became heavier, and the wind grew in force. The path was rocky and steep in parts and slowly but surely the rain and cold started to penetrate my meagre defences. And the path went from being wet and slippery to being a rapidly moving stream on the slopes and small lakes in the hollows; my boots and socks soon became saturated and my feet became quite cold.

And the heavy rain and gale-force wind continued, without relenting, for the rest of the day.

I passed over the col and its famed cross, with only a brief stop to read the history dating back to Roman times, and to take a quick photo from under a sheltering tree; I was starting to get quite uncomfortable, and decided to stop at the next village, and abandon my previous ambitious objective for the day.

But my bad leg just would not do as I wished and seemed to have a mind of its own; I could only navigate the rocky steep descent to El Acebo, in the river of mud, with great care.

But in the village the only apparent accommodation had already been taken.  Luckily I was able to find a room in a little Rural Hostal, in a side street.  There were only three rooms and I was fortunate to get the last one.

After a hot shower and a nap, I felt completely revived. And a delicious vegetarian dinner, cooked by the delightfully hospitable host, capped off a challenging day.

During the dinner I learned that a lot of people had suffered much more that day than I; some had arrived verging on hypothermia.

I awoke in the dark to the sound of much barking. At breakfast I learned that the owner had four dogs; they slept outside in all weathers and kept the wild pigs at bay, otherwise the vegetable gardens and orchards would be destroyed.

When I left after breakfast, two of the dogs came up to me and gently licked my hand and wagged their tails; they did not seem vicious enough to attack an aggressive hungry wild pig.

For four hours, I slowly descended from the mountain, until I crossed the river into the beautiful village of Molinaseca.

From Molinaseca the remainder of the walk was on asphalt.

During the Roman period, Ponferrada was the centre of the largest mining centre in the Empire, producing gold and other minerals.  In latter days, coal and tungsten were extracted, but in the 1980s the mining industry collapsed, and today the town survives on agriculture and tourism.

In the centre of the town stands the Castillo de los Templarios, the restored Templar castle, originally built during the 12th century. The Templar knights provided protection for the pilgrims, and escorted them through the region.

Just after I passed the castle, it started to rain once more, but luckily I soon found a very comfortable and not expensive room, in a hostel beside the market.

And then went for lunch in the bar next door.