For access to open spaces, fresh ocean air and multiple sporting facilities, Green Point, Cape Town, is by far the best place in which I have ever had the opportunity to live.  I suspect that I will never find better.  And add in friendly and laid-back people, affordable food and wine, and a Goldilocks climate – never too hot, never too cold.  For me, it is perfect.

From our eyrie on the slopes of Signal Hill, it is about 600 m to the Green Point shops, restaurants, bars etc. and across the road is the edge of the sporting and recreational park, with the Cape Town stadium, two cricket grounds, an international standard athletics track, an 18-hole golf course, a rugby club with several pitches and a beautiful park, with lakes, abundant birdlife and a plethora of native flora.

And beyond the park is the ocean and a wide promenade, that stretches as far as I would ever care to walk.

One day recently, on my usual daily walk past the rugby grounds, I noticed that several huge tents were being erected and each day after, more and more tents were being added.  The event was the Cape Town rugby 10s tournament, also incorporating a netball and beach volleyball competition.  All in all, there were 100 rugby teams, 40 netball and 40 volleyball, all competing over three days.

Now I have played in a few rugby 7s competitions, in my very amateurish and much younger days, but I had never heard of rugby 10s.  The game involves ten players on each team – five forwards and five backs, and each game has two 9-minute halves, with a 2-minute half-time.  The rules are similar to rugby 7s.

And typical of anywhere one finds rugby, copious volumes of beer were consumed, and the Cape Town event sported, what was reputed to be, Africa’s largest beer tent.

Two days later, the tents, and all evidence of the rugby event, had disappeared, to be replaced, outside the football stadium and surrounding roads, by the construction of temporary facilities for the Cape Town leg of the Triathlon World Cup.

This event is held over two days, month by month, in several cities in both hemispheres.  There are four categories in the competition, with the elite competing over 750 m swim, 40 km cycle and 10 km run.

As with the rugby competition, all evidence of the complex facilities had disappeared within two days.  On the third day, I found several strange metal strips on the forecourt near the stadium, each with protrusions at intervals.  There were two groups apart, but at angles to each other and not parallel. I was quite puzzled.

The next day, I found that barriers had been added, but I still could not imagine what they were for.  This time I found a park employee, who explained that when there was a football match in the stadium, the whole area was fenced off, and all spectators had to pass through the barriers to be searched for alcohol, drugs, knives, guns etc.

Sure enough, the next day I found that the whole area had been fenced off.  It was not obvious at the start. 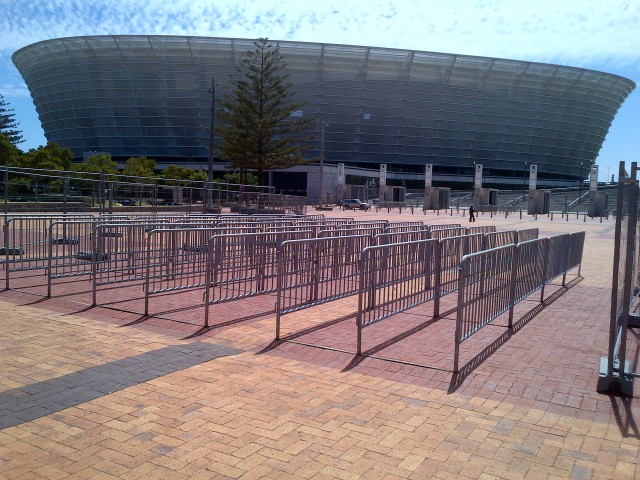 This weekend, there is a limited-overs cricket match taking place. 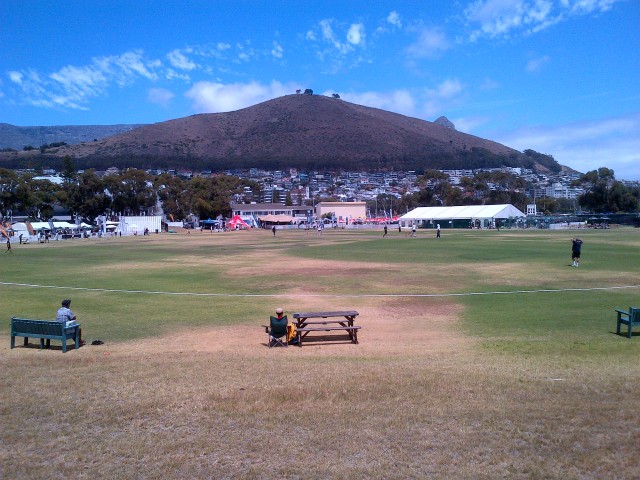 And of course, tonight there will be the football match at the stadium.

It seems that there is never a dull moment in Green Point.