It is now five days since I left Porto, spending the nights in Matosinhos, Vila do Conde, Arcos, Barcelos and tonight in Balugäes.  In total I have walked about 86 km so far.

It was a blustery day when I set out last Wednesday.  Overhead the clouds were moving rapidly, but down below, along the river, all was relatively calm.  In the distance, I could see the spray of huge waves smashing against the sea wall.  I had a sinking feeling that I was going to experience a reminder of what an angry North Atlantic can be like.  And how could I ever forget; I grew up in its full blast on the north coast of Ireland.

As I reached the coast to turn north, the rain started.  It was like having a pressure hose aimed straight in your face.  When I first had a warning of the coming storm, I quickly donned my poncho, but it proved to be next to useless; it filled with air and threatened to lift me off, like Mary Poppins.  I scuttled along the promenade desperately looking for shelter, and finally escaped the storm into a passing coffee shop, where I spent an enjoyable time chatting with the owner.  I finally emerged, totally convinced that the Portuguese were my kind of people.  At least that lady was.

But the relative calm did not last for long, when another storm hit; one could see them coming in the distance; a huge threatening black mass, preceded by cold winds.  And for the rest of the day I was repeatedly hit, sometimes sheltered, other times totally exposed, until I finally reached my destination, feeling thoroughly beaten up.

The next day the sea was still thundering against the coast, but on land all was relatively calm.

I continued north along the coast, much of the time on an elevated boardwalk.  The coastal scenery was beautiful.  I was completely alone; I never saw another walker.

I spent the night in a beautiful old hotel in Vila do Conde.

The next morning, I set off late, for it promised to be an easy day.  I headed inland along a very busy minor road, through village after village, until I reached the few houses that consisted of Arcos.

Finally back in the countryside at Arcos

I found the walk to Barcelos to be rather challenging.  Much of it was on roads paved with cobblestones, and they are unforgiving on the feet, knees and hips.  There was no escaping them, and by the time I limped into Barcelos, I felt thoroughly beaten up.  I recall that the London Marathon has a short stretch of cobblestones in front of the Tower of London and for the race, the organizers  cover it with thick carpet to ease the impact on the runners.  There is a good reason for having that carpet.

Last night the rain started again and it rained heavily all night, with intermittent thunderstorms.  This morning it was still thumping down, so I had a late breakfast, and started out after 10:00 when the rain finally ceased and the sun started to shine.

For much of the route a cross-country cycling race was taking place and the backs of the competitors were plastered with mud. 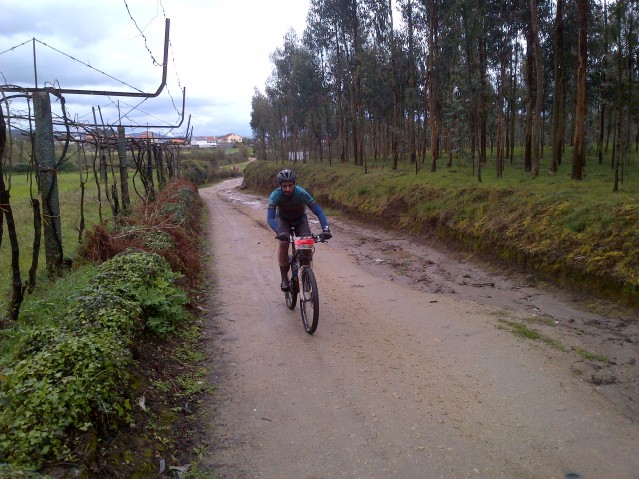 And finally one for my sons, who once claimed that only bulls could have horns.  You can just about see the tiny calf behind its mother. 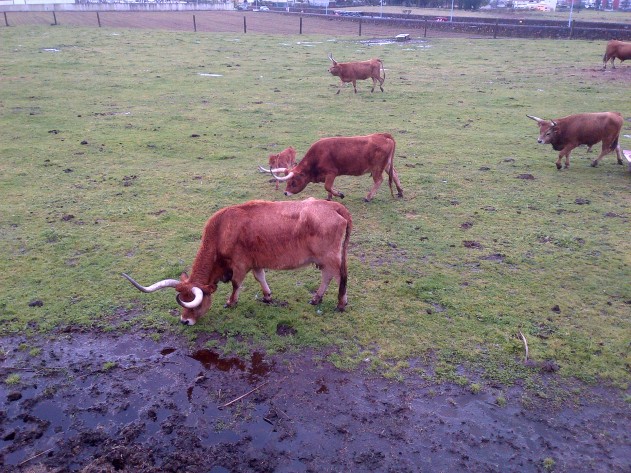 This has not been an easy camino so far, but sometimes I have to remind myself that a pilgrimage can turn out to be a physical and mental challenge.  It is not a short stroll in the countryside.  I have not been walking comfortably – my leg is not happy, but in my head and in my heart, I feel good.