I have been researching my family history and those of others, for more than thirty years.  If individuals were still alive in 1837, when UK registration of births, marriages and deaths became mandatory, I was almost always able to find them. For those who died before 1837 and had moved away from their parish of birth, prior to the expansion of the internet and database access, it would have been a matter of luck to locate them.

I had four cousins from Hethel, in Norfolk (see here), that seemed to have disappeared.  They were present in the 1851 census, but not in that of 1861.  Over the years, I repeatedly searched, but in vain, until I stumbled on some Australian sites.  It turned out that all four Blackwoods had emigrated to Australia in the late 1850s.

Three of my missing cousins were siblings – Susanna, James and Isaac.  Their grandfather, John Blackwood (1764-1848) and Mary Harvey, were my third great grandparents.

Susanna was the first of my cousins to migrate.  She married Robert Lane in 1845 and in 1855 they set sail for Australia, with their three children.  By that time three of her four sisters and her father were dead, and her mother had remarried.

On 6 October 1855 they set sail for Australia from Liverpool on the maiden voyage of the ill-fated ship, the ‘Schomberg’, with 430 passengers on board. It made landfall off Cape Bridgewater on Christmas Eve but next day it ran aground on a sand bank a mile east of Curdi’s Inlet, near present-day Peterborough. No lives were lost and the next day the passengers were transferred to a passing steamer, the Queen, on her way from Warrnambool to Melbourne.  Due to dangerous seas, the wreck was eventually abandoned and subsequently broke up. The captain was later committed for trial for neglect of duty, but was acquitted, due to lack of evidence. (see here) 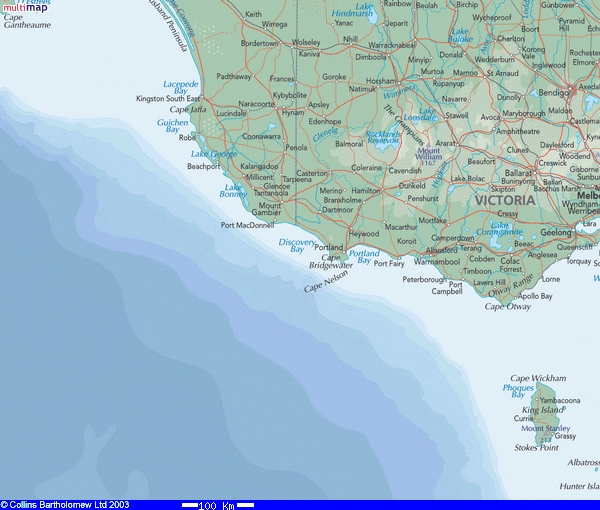 The coast of Victoria, where the Schomberg ran aground near Peterborough

The family survived the wreck, but lost all their furniture. From Melbourne they were eventually taken on to Tasmania, and settled at Longford, where they had five more children.

In 1852 James Blackwood married Hannah Mickleborough and they had two children
in Norfolk. On 14 May 1857 they sailed to Australia from Plymouth on the ‘British Empire’, arriving at Portland, Victoria, on 2 September. They were accompanied by William Blackwood, a cousin of James, together with William’s wife and daughter. James and Hannah settled in Hotspur, in Victoria, where they had a further 10 children.

Map of southern Victoria, showing the location of Hotspur

Hotspur developed as a small settlement on the banks of the Crawford (aka Smokey)
River in south-western Victoria in the 1840s. As with many of these early townships,
it developed near a creek or river crossing, which provided a major obstacle for early
travellers, with their heavy bullock-drawn drays and wagons, and consequently they
camped on the banks. Soon one or more inns were constructed to cater for the
constant stream of travellers from Portland Bay to the early pastoral runs of the
interior, and a settlement was established close to this difficult river crossing point. (Ballarat & District Genealogical Society)

James Blackwood and his family became established in Hotspur, as evidenced by Blackwood’s Road, running some 4 km from the town to a junction with the Condah-Hotspur lower road.

John James and William Thomas were two of the grandsons of James and Hannah
Blackwood (their parents were Robert & Agnes Blackwood), and they both served with the Australian Infantry (1st AIF 6th Battalion) in the First World War. William, a private, was killed on 4 October 1917. He is buried at the Oosttaverne Wood Cemetery at plot IV C 11. The cemetery is located on the N336, just over halfway from Leper to Warneton.

(Note: The three family photographs are from the website of a distant relative, Gary Ayton at his web site)

Like many rural settlements in Australia, the local Hotspur community commemorated the involvement of 40 of their young men, who participated in World War 1, by planting an Avenue of Honour. The Hotspur Avenue of Honour is a little unusual in that the trees were native Australian Kurrajong trees, whereas many similar avenues were planted with imported trees such as elms or plane trees. In addition, was erected a Roll of Honour for the 35 who were ex-students of Hotspur State School. The Roll of Honour is now housed in the Community Hall.

The Avenue of Honour began in front of the ‘Rising Sun Hotel’, and each tree
displayed the name of the soldier, the unit in which he served, and the name of the person who planted the tree. Fifteen of the soldiers were killed in service. John Blackwood’s tree was number 7, planted by Miss P. Blackwood and number 27 was that of William Blackwood, planted by Mrs R. Blackwood. The planting ceremony took place on June 2, 1918. In June 2001, The World War 1 Avenue of Honour was restored, with a ceremony to commemorate the 40 soldiers from the district and the unveiling of a new brass plaque with their names, mounted on a large rock.

(Note: The information about Hotspur comes from here)

William and Sarah Blackwood, together with their young daughter, Caroline, accompanied James and his family from Hethel. They eventually settled in Creswick, Victoria, about 18km north of Ballarat. Creswick was a gold mining town, founded only six years earlier at the start of the Victorian gold rush.

Caroline married John William Russell from Boorowa and had the first of their eight
children in 1876, at 12 Gardiner Street, Creswick, opposite St. Andrew’s church. Caroline’s last two children, Leila and Richard, both died in their early teens in 1899 and 1903 and this was cited by Bill Russell, one of Caroline’s great grandsons, as the cause of her sudden death ‘of a broken heart’ in 1904.  Caroline was outlived by her mother, Sarah Anne, who died in 1916, aged about 86. The house on Gardiner Street has since been demolished.

Much of the information about Caroline and her family came from Bill Russell. He
twice visited Hethel and on one of the occasions found an old Blackwood tombstone
propped up against the wall of the church. He took a photograph of it, but was not able to
remember what he did with it. He also mentioned a portrait of Caroline that used to hang on the wall of her house in Creswick and an obituary of Caroline that appeared in the Crestwick Adviser on 28 June 1904, both of which have also been misplaced.

I do not know when the third sibling, Isaac Blackwood, migrated to Australia and nothing is known of his life until c1873, when he married Susan Simkin, a local girl, in Digby, Victoria. They had four children, three in Digby, and the forth in Ballarat.  Isaac died in Portland in 1919.

I lived in Australia for five years, from 1971 to 1976.  I left to see something of South and Central America on an extended trip, intending to eventually return.  When I do finally get back, one of these days, I want to visit the graveyard in Hotspur and walk along Blackwood’s Road.

I am certain that I will not feel like a stranger there.