For the past two weeks the weather in Cape Town has been unseasonably hot, the temperature hitting more than 30 C every day.  The average high for October is 22 C and the record high 32 C (in 1997), yet last Monday my dentist recorded the temperature on her thermometer at 38 C.  Considering that October is equivalent to May in the northern hemisphere, summer seems to have arrived very early.  So, knowing that it was going to be another hot day, last Wednesday I decided to leave earlier than normal, at nine o’clock, for my habitual long daily walk.

When I set out from our ‘eyrie’ on the hill about Green Point, I could see a huge fog bank approaching the shore below.  By the time I reached the Promenade along Beach Road, some 25 minutes later, the fog was approaching and the temperature had dropped from hot to cool, only the closest buildings were visible, and the little of the ocean that one could see was eerie calm.  And the fog horn was regularly booming.

Now I grew up on the north coast of Ireland, where sea fog was not unusual, and in those days waking to the fog horn moaning during the night, was nothing unusual.  But it never occurred to me to find out out what made that noise.  I assumed that it came from something at the coastguard station on Ramore Head.  So now was my opportunity to find the source.

I assumed that it came from the Green Point lighthouse, about a kilometer away, but as I got closer, it was obviously not from the lighthouse, but from something by the water.

And there it was, an insignificant object on a pole, rusting and badly needing a repaint job.  I must have passed it a hundred or more times and never noticed it.

Just above the fog horn is a car park, and I saw a car arrive close to the horn.  Just as an elderly woman got out of her car and stumbled down the slope to the promenade, the horn boomed and the poor dear nearly fell over.

There have reputedly been more that 450 shipwrecks along the shores of Table Bay, most resulting from inclement weather, from the gales that lash the shore in winter.  In the case of De Visch in 4 May 1740, it was the result of a navigational error.  During the night, mistaking the light at Three Anchor Bay beside the current lighthouse for that of Robben Island, the ship was driven onto the rocks.  Thanks to a cable from ship to shore, all but two of the crew were saved.

One of the witnesses was Jürgen Leeuwenberg who later painted the scene of the disaster.  The painting hangs in the National Library of South Africa. 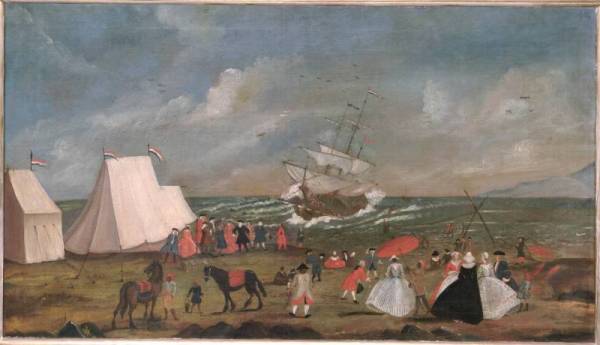 No two days are the same along the Green Point promenade…